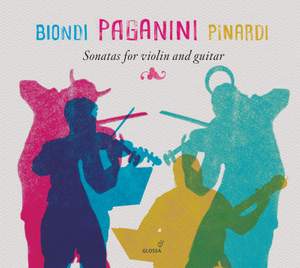 Biondi brings his long experience in Baroque violin to these readings, radically different from the usual Romantically-inspired renditions of these sonatas…Biondi’s touch is lighter (his ornaments... — BBC Music Magazine, October 2018, 4 out of 5 stars More…

Fabio Biondi has chosen a selection of delightful virtuoso chamber music pieces by Niccolò Paganini to mark his tenth album for Glossa. Together with his long-term colleague from Europa Galante, the plucked-string specialist Giangiacomo Pinardi (here playing an original romantic guitar from c1825), Biondi delivers one of the most special Glossa albums of recent times. The works, composed between 1804 and c1828, are mainly two-movement sonatas contained in the Centone di sonate collection, although the album also includes the popular Sonata concertata in A major.

Recorded in Valencia by the engineer and producer Fabio Framba (another well-known component of Biondi’s recording setups), the booklet of this album includes a highly original essay signed by Pierre Élie Mamou, in which he looks into the Devil/God dichotomy as applied to the figure of Paganini by his own contemporaries. The graphic design for the CD takes its inspiration from this idea, for another typically Glossa look, listen and read experience.

Biondi brings his long experience in Baroque violin to these readings, radically different from the usual Romantically-inspired renditions of these sonatas…Biondi’s touch is lighter (his ornaments are balletic); his sound a clean bel canto. Expressive devices are subtler, too, while responsive to Paganini’s quixotic moods…Their approach is that of equal partners enjoying intimate chamber music (even if, occasionally, the guitar sounds a little shy in the balance).

There’s an extent to which all I need to say here is ‘Go and buy it’, because even before the first three bars are out you’ll be happy that you did…The first thing to say is that the instruments themselves feel absolutely spot-on…and are played with an effortlessly singing mellifluousness and nonchalant virtuosity…An indisputable cracker.

Recorded in Valencia in a seductively warm and open acoustic using the original manuscripts and roughly contemporary instruments – a 1767 Gagliano violin and an 1825 French guitar made by Mauchant Frères – Fabio Biondi and Giangiacomo Pinardi create the uncanny impression of two friends making music in the late evening for the sheer pleasure of it. Technically immaculate and musically exquisite, it is difficult to imagine this enchanting music better played or engineered.