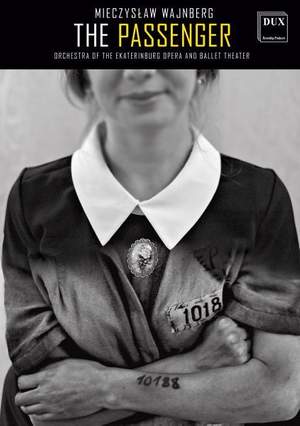 The opera’s premiere at the 2010 Bregenz Festival was given wide dissemination through an Arthaus DVD release. Now comes an equally compelling representation of the first Russian production given... — BBC Music Magazine, August 2018, 5 out of 5 stars More…

The Passenger by Mieczysław Wajnberg is much more than a stage or musical work: It is a testament to the cruel 20th century, telling about totalitarian regimes which led to annihilation of millions of lives. Completed in 1968 in Moscow, the artwork by Mieczysław Wajnberg and librettist Alexander Medvedev, plenty of universal, anti-totalitarian significance, waited for its world stage premiere until 2010. In Russia, it was only in 2016 that the Theatre of Opera and Ballet in Yekaterinburg made the effort to fully stage this extremely important opera. The present DVD, issued in cooperation with the Adam Mickiewicz Institute, is a registration of this excellent Russian performance.

Subtitles in Polish, English, and Russian.

The opera’s premiere at the 2010 Bregenz Festival was given wide dissemination through an Arthaus DVD release. Now comes an equally compelling representation of the first Russian production given in 2016 by stellar soloists….The earlier Bregenz DVD perhaps holds advantages through the more technically refined playing…But the flashback scenes in Auschwitz, which seemed lengthy and discursive in the Bregenz version, are far more convincingly paced by the Russian company.

Strassberger’s production stands up well on its own terms…The Russian honours go to the singers, especially Nadezhda Babintseva as Lisa and Natalia Karlova as Martha… A highly commendable issue: with fascism on the march again in central Europe, and offshoots sprouting obscenely from North America to Russia, Weinberg’s opera is increasingly relevant.

The singing of this large cast of soloists is strong and richly coloured throughout. Especially impressive are the three principal characters. Natalya Karlova sings exquisitely as Marta, managing to convey great inner strength and maturity despite the youthful radiance of her voice…The clarity and control of Oliver von Dohnányi’s conducting helps to illuminate this long and complex score.