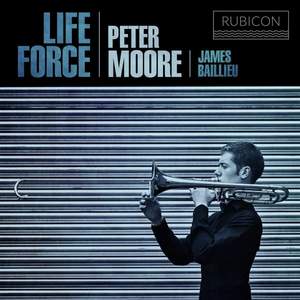 Peter Moore won the BBC Young Musician of the Year in 2008 aged just 12, and became the youngest winner of the competition. At the age of 18 he was appointed co-principle trombone with the London Symphony Orchestra. In 2015 Peter joined the prestigious BBC New Generation Artist scheme.‘Life Force’, Peter’s debut album is a superb portrait of his artistry and extraordinary talent, showcasing works that have played a pivotal role in his development as an artist, and for which Peter says he has special and great affection for – they became his life force, and still play a big part in his busy musical life.

Music chosen by Peter Moore because, he says, it ‘feels special to me’ and which, taken together, portrays a young trombonist with a deeply romantic soul…Moore is helped at every stage of the way by his duet partner, James Baillieu – who supports him with the same sensitivity to mood and colour that he brings to Lieder. And this is a real partnership.