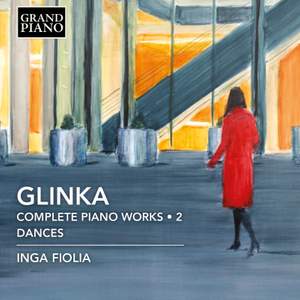 Glinka: Waltz in B flat

Glinka: Mazurka in A flat major

Glinka: Variations on a theme from Die Zauberflöte by Mozart

Glinka: Cotillon in B flat major

Glinka: Valse-Fantaisie in B minor for piano, G. vi193

Glinka wrote a series of delightful polkas, mazurkas, galops and waltzes that were predominantly intended for fashionable drawing rooms and salons. He also wrote more substantial pieces such as the Grande Valse in G major and the Polonaise in E major which were initially scored for orchestra. Some pieces were also based on pre-existing melodies such as the Variations on a theme of Mozart, which is inspired by a melody drawn from Die Zauberflöte and the attractive Tarantella in A minor, a rhythmic adaptation of the Russian folk song In the field there stood a birch tree.