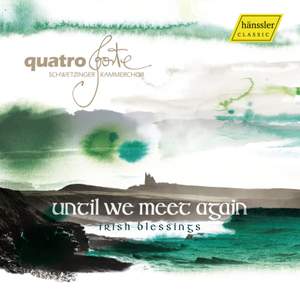 Until We Meet Again

Joel Raney: Think of Me and Remember

The Schwetzingen chamber choir Quatro Forte, 'two dozen voices' that 'truly sing as bewitchingly as if the choir had our hearts in their hands' (Schwetzinger Zeitung), was founded in 1991. These days, the Schwetzingen choir has a privileged place in the cultural life of the Rhein-Neckar metropolitan region, having developed a varied repertoire in the course of its twenty-seven-year existence. With works for up to 16 parts from the Renaissance to modern times, both unaccompanied and with orchestral accompaniment, the chamber choir displays great musical versatility, with special emphasis on singing the music so as to express the full meaning of the words while achieving a smoothly balanced, sensitive choral sound. Alexander Gütinger has been musical director of the ensemble since 2008. It is to his energy and vision that the choir owes its homogeneous balance of voices and its consequent audience recognition. The present CD was recorded in the Franz-Danzi-Saal in Schwetzingen with the generous support of the City of Schwetzingen and its Music School. 'Peace and security is conveyed by the purely instrumental works on this CD, which owe their special timbre to the traditional Irish instruments, the ?ute and harp. When I put together the programme for this CD I was amazed at the number of different settings of Irish blessings, and we had to limit ourselves to a selection. They are contrasted here with pieces that have different words but express the same idea. The heartfelt warmth of the lyrics and the captivating charm of the compositions moved us deeply at rehearsals and are sure to remain with the choir for many years to come.' - Alexander Gutinger