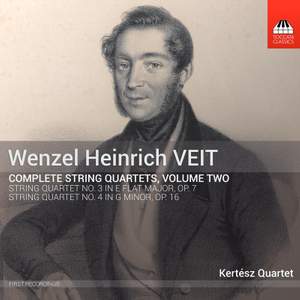 The German-Bohemian composer Wenzel Heinrich Veit (1806–64) –Vaclav Jindrich Veit, as he later became known in Czech – is one of music's most unjustly forgotten figures. As these first recordings of his four string quartets reveal, he is not only the link between the Bohemian composers of the end of the Classical period and the wave of Czech Romanticism that began with Smetana – he is also an outstanding composer in his own right. His four quartets trace the stylistic evolution of his time: they emerge from a debt to Haydn, Beethoven and Spohr and embrace Mendelssohn and Schumann on their way to pre-echoes of Smetana and Dvorak. A review of Volume One in this series stated: 'This period-instrument quartet has a wonderfully rich, warm ensemble sound. I am very much looking forward to volume two'. Well, here it is.