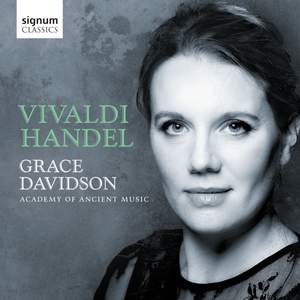 By turns achingly lyrical and sprinkled with vocal fireworks, Handel’s motets present a winning showcase for a soprano such as Davidson, blessed with the ability to soar, to warm a note with... — BBC Music Magazine, October 2018, 3 out of 5 stars More…

Signum Records are proud to present the debut orchestral recording from Grace Davidson, one of the UK’s leading British sopranos specialising in Baroque music. She is joined by some of Europe’s leading Baroque musicians from the Academy of Ancient Music to perform a selection of works by Handel and Vivaldi, with performaces led by violinist Bojan Čičić under artistic director Joseph Crouch.Grace won the Early Music Prize while studying singing at London’s Royal Academy of Music. Since then, she has worked with the leading Baroque ensembles of our day, singing under the batons of Sir John Eliot Gardiner, Paul McCreesh, Philippe Herreweghe and Harry Christophers. Her discography includes a decade of CDs with The Sixteen, many of which feature her as soloist – Handel’s Jeptha (as Angel), Dixit Dominus, Monteverdi’s Vespers of 1610, Pianto della Madonna, and the Lutheran Masses of Bach.

By turns achingly lyrical and sprinkled with vocal fireworks, Handel’s motets present a winning showcase for a soprano such as Davidson, blessed with the ability to soar, to warm a note with artfully calculated vibrato, to phrase with impeccable taste, and possessed of a technical security that allows Silete venti’s formidable Alleluia to pass in a dazzling flash of lightly-worn pyrotechnics.

Even in this golden age of ‘early music’ sopranos, Grace Davidson is outstanding for her seraphic purity and evenness of tone. She dispatches her runs…with a crystalline clarity, and soars blithely above the stave. With her clean, precise attack and vivacious rhythmic sense , Davidson excels in joyous innocence…Yet – and you probably saw it coming – I found something wanting in Davidson’s unerringly elegant, mellifluous singing.

The voice is radiantly fresh and clean, and she successfully navigates almost all the technical perils in her programme of sacred motets by Handel and Vivaldi, spiritedly backed by another of Britain’s Academies, the Academy of Ancient Music.