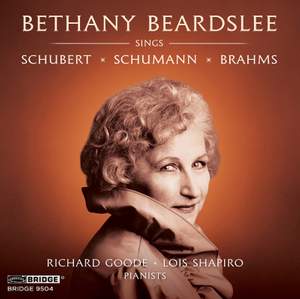 No. 4, An die Nachtigall

Bethany Beardslee is renowned as one of the great lyric sopranos of the twentieth century, and the inspiration for dozens of composers who wrote specifically for her voice. Accompanied by pianists Richard Goode and Lois Shapiro, Ms. Beardslee's performances of lieder by Brahms, Schumann and Schubert display her exquisite artistry.USC Professor of Music and Journalism Tim Page writes: 'Her flexible, expressive voice, with its silvered timbre and warmly caressing middle range, was suited not only to the premieres and first American performances she sang (by composers ranging from Schoenberg to Stravinsky to Milton Babbitt) but also to the Romantic repertory'.These recordings, from 1984 and 1986, have been remastered by Grammy award winning engineer Adam Abeshouse.