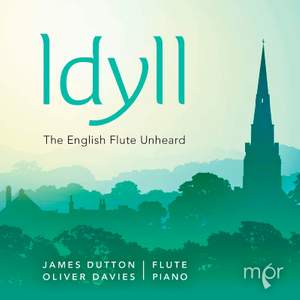 This recording contains forgotten gems for Flute and Piano from the 20th Century in a huge variety of styles, which have never been commercially recorded, as well as two works for Solo Flute. All of these composers and performers were associated with the Royal College of Music, either as teachers or students. Better known names include Cecil Armstrong Gibbs and Leonard Salzedo with lesser known but by no means lesser composers including Stanley Bate, Norman Demuth, Sir George Henschel, Robin Milford, Cyril Rootham, Richard Walthew and John White. The recording also demonstrates the influence of the French school of flute playing in the 20th Centurry and these excellent and sensitive performances have been beautifully captured in the lovely acoustic of the Yehudi Menuhin Hall by Recording Engineer Tony Faulkner and Producer Mike Purton. A recent review from 'Pan' Magazine, the journal of the British Flute Society says: “This [album] is recorded with clarity and a warm tone quality; the instruments are always well balanced and both performers play with impressive accuracy and conviction. I particularly enjoyed the sense of simplicity that comes across in this recording; that’s not to say that the music is particularly easy, but one has the sense when listening that the music, and its interpretation, has been carefully considered and is presented in a clear, logical way, with appropriate expressivity, without giving in to overindulgence. These are two instinctive musicians who judge the pacing and expression of the music with sensitivity and intelligence. There are some real gems amongst the repertoire here which deserve to be better known with contemporary audiences; well worth exploring.”