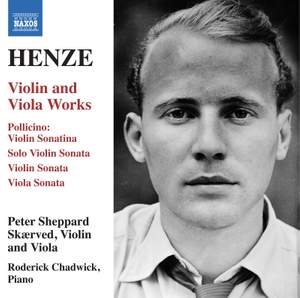 Hard to imagine a finer advocate for these alluring pieces by Henze than the remarkable Sheppard Skaerved. — Sunday Times, 24th June 2018 More…

The sonatas recorded here encompass almost the entirety of Hans Werner Henze’s creative life. Composed in difficult conditions just after WWII, the Violin Sonata covers the broadest range of human emotions, and is in some ways a study for the extraordinary First Violin Concerto. Steeped in Italian mythology, the Solo Violin Sonata is ‘a real piece of theatre,’ as is the emotionally shattering Viola Sonata, written straight after the completion of the ballet Orpheus. The Violin Sonatina is drawn from Henze’s children’s opera Pollicino, and the two remaining miniatures are memorials for lost colleagues. Internationally acclaimed violin virtuoso Peter Sheppard Skaerved’s close connection with Hans Werner Henze is well recognized, and this release follows on from his recordings of Henze’s First and Third Violin Concertos “having some seriously emotional meat on the bones of this traditional form” (MusicWeb International), and the Second Violin Concerto summed up as “a superb [album]… highly recommended” by Gramophone. This is the first recording to bring together Henze’s solo sonatas for violin and viola, as well as the early Violin Sonata and later Violin Sonatina. Peter Sheppard Skaerved recorded the composers revised 1992 version of the Solo Violin Sonata on the Metier label in 2000, but returns to the 1977 original for this recording, completing a deal with the composer to “see who is right!”

Hard to imagine a finer advocate for these alluring pieces by Henze than the remarkable Sheppard Skaerved.

Sheppard Skærved evinces a subtle ear for colours on the larger instrument, often employing unscripted harmonics and ‘una corda’ playing to fine effect. He and Chadwick play throughout with an authority that bears witness to their long acquaintance with Henze’s melodious muse.