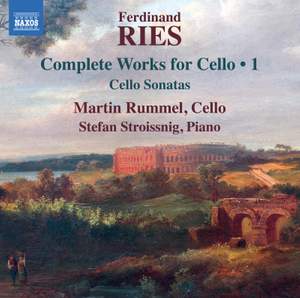 Ferdinand Ries’s life and work are inextricably intertwined with those of his friend and teacher Beethoven, and both Cello Sonatas, Op. 20 and 21 were dedicated to cellist Bernhard Romberg, who performed regularly with Beethoven. Ries exploits Romberg’s extraordinary sound quality in the lower register of the cello in music that resonates with references to colleagues such as Haydn and Hummel. Ries’s final Cello Sonata, Op. 125, completes a triptych that richly deserves its place in the cello repertoire. This release joins an ongoing program of releases of music by neglected composer Ferdinand Ries. This has included an edition of his complete piano sonatas and sonatinas played by Susan Kagan, to whom “classical music lovers owe a debt of gratitude for rescuing these attractive keyboard creations from the undeserved obscurity that they’ve been languishing in for the past two centuries or so.” (Halesowen News) Acclaimed cellist Martin Rummel has recorded widely for labels including Paladino Music and Capriccio. His recordings for Naxos include works for cello and piano by Joseph Merk and Reinhold Gliere. Recordings by pianist Stefan Stroissnig include Beethoven’s Second and Fourth Piano Concertos with the RSO Wien conducted by Heinrich Schiff on the Gramola Records label, and his recording of the Four Impromptus Op. 90 by Franz Schubert and the Sonata in B minor by Franz Liszt was awarded the ‘Pasticcio Prize’ by Austrian Radio.