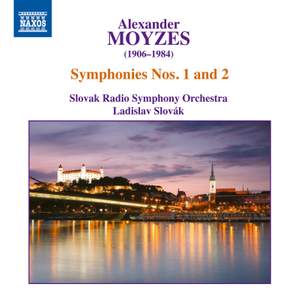 Along with Suchon and Cikker, Alexander Moyzes was one of the leading Slovak composers of his generation. His compositional style was inspired by the folk music and beautiful landscapes of his native land, but also took account of contemporary trends in European music after the First World War. These early symphonies, infused with Moyzes’ masterful orchestration and control of counterpoint, signify a new period in 20th century Slovak music. This album is a reissue of a previous release from 2000 that was part of the Marco Polo complete Moyzes symphonic cycle. Fanfare wrote of the original release: “A [release] no collection of 20th century symphony can do without. Bring on the remaining 10!” ClassicsToday.com wrote: “Moyzes’ music is engaging, well crafted, and beautifully orchestrated- qualities clearly understood and successfully conveyed by Ladislav Slovak and his Slovak Radio Symphony Orchestra.

These two early-20th-century symphonies from one of Slovakia’s most important composers are lushly Romantic, big-boned works. Enjoyable stuff.