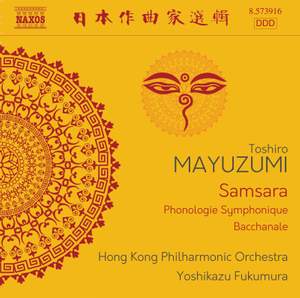 A vibrant and dramatic trio of symphonic works, exploring the virtuosic capabilities of each instrument. Climactic, intense and delivered with precision. — BBC Music Magazine, August 2018,

Toshiro Mayuzumi was one of Japan’s foremost 20th-century composers, enjoying a distinguished international reputation on a par with that of Toru Takemitsu, as well as that of an enfant terrible of the post-war Japanese music world. Versatile and prolific, he contributed music for films, the theatre, the 1964 Tokyo Olympics and broadcasts. His enthusiasm for avant-garde Western music led him to study in Paris, and the Phonologie Symphonique is a synthesis of Varese-like acoustical experiment and serial techniques. The jazz-tinted Bacchanale is Mayuzumi’s attempt to produce ‘a cosmos of sounds reflecting the vital energies of the origin of music,’ and the symphonic poem Samsara is a musical expression of Buddhist teaching, an attempt to escape the seemingly endless cycle of birth and rebirth. This recording first appeared in 1984 on the Marco Polo label. The relationship between the label and the Hong Kong Philharmonic Orchestra has been one of the most fruitful from the early days of Naxos to the present, right up to their irreplaceable contribution to the brand new Wagner Ring cycle conducted by Jaap van Zweden.

A vibrant and dramatic trio of symphonic works, exploring the virtuosic capabilities of each instrument. Climactic, intense and delivered with precision.