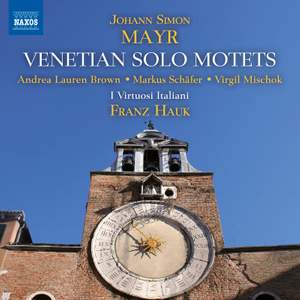 Johann Simon Mayr became one of the most popular opera composers in Europe in the period preceding Rossini, but his younger career in the last decades of the 18th century was largely as a church musician, dividing his time between his native Bergamo and Venice. Often taking the form of small-scale religious operas, his Venetian solo motets were tailor-made for the singers of the day, with notable results, as can be heard in the soaring expressiveness of ‘Exsurge, anima,’ the cavatina-style melodies of ‘O Deus, quot me circumdant,’ and the contrasting atmospheres of fear, dread and serenity in ‘Qual colpa eterno Dio.’ Franz Hauk is the world’s leading expert and exponent of the music of Johann Simon Mayr, and his numerous new editions and recordings of operatic and other vocal works by this composer is internationally recognized as highly significant: “Naxos’s project of recording the major works of Simon Mayr is an extremely important event, introducing to most of us a composer of genuine individuality and importance.” (Fanfare on the cantata Arianna in Nasso) All of the soloists here have a close association with Franz Hauk’s Simon Mayr project, and each have successful performing and recording careers.