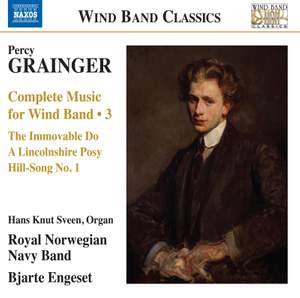 Grainger: The Lads of Wamphray March

Grainger: The Power of Rome and the Christian Heart

III. The Nightingale and the Two Sisters (Version for Wind Ensemble)

Grainger: The Immovable Do (The Cyphering C)

Grainger: Prelude in the Dorian Mode

5-Part Fantasy No. 15 (After J. Jenkins) [Version for Wind Ensemble]

The final volume of Percy Grainger’s complete music for wind band once again respects his precise instrumental demands in pieces that span the breadth of his career, from his first large work in the genre, ‘The Lads of Wamphray March,’ to ‘The Power of Rome and the Christian Heart,’ his largest such work and one of his last. Also to be heard are ‘A Lincolnshire Posy,’ one of the genre’s most famous and beautiful works; ‘The Immovable Do,’ which contains “the most long-held pedal note in all music”; and the revolutionary ‘Hill-Song No. 1,’ which Grainger considered the greatest of all his compositions. All of the scores in this series follow, to the letter, Grainger’s specific instructions as to the instrumentation. The Royal Norwegian Navy Band have starred for Naxos before, not least on some Sousa albums. Bjarte Engeset has been music director of the Tromso Symphony Orchestra and The Norwegian Wind Ensemble, artistic director of Northern Norway’s Northern Lights Festival and Opera Nord, as well as permanent guest conductor of the Flemish Radio orchestra. His discography includes more than 30 best-selling recordings, including an eight-album set of Grieg’s complete orchestral works on Naxos.