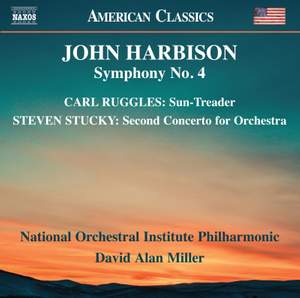 There’s a lot to enjoy in these vibrant performances, from the otherworldly atmosphere conjured up in Stucky’s Concerto to the almost Disney-like bonhomie that pervades the Harbison. — BBC Music Magazine, August 2018, More…

I. Overture (With Friends)

This is the third recording in a multi-year partnership between the National Orchestral Institute Philharmonic and Naxos to release one album of American music each year. A study in dramatic contrasts, Carl Ruggles’ ‘Sun-Treader’ is an overwhelming, granite-hued tone poem by one of New England’s most original and uncompromising composers. Steven Stucky’s luminous Pulitzer Prize-winning ‘Second Concerto for Orchestra’ is a riveting exploration of sonority and sound-painting while John Harbison’s ‘Fourth Symphony’ is a big, bold, jazz-imbued work by one of America’s most important living symphonists. These three American orchestral masterpieces comprise a program that will impress and delight in equal measure. Grammy Award-winning conductor David Alan Miller has established a reputation as one of the leading American conductors of his generation. His work with the National Orchestral Institute Philharmonic has resulted in several critically-acclaimed recordings. “Conductor David Alan Miller’s tempos are broad, letting the music breathe and allowing the composer’s clear textures and melodic warmth to be fully revealed. The NOIP plays magnificently.” (Audiophile Audition)

There’s a lot to enjoy in these vibrant performances, from the otherworldly atmosphere conjured up in Stucky’s Concerto to the almost Disney-like bonhomie that pervades the Harbison.

[Sun-Treader] This tightly knit, uncompromisingly tough tone poem (written over five years from 1926 to 1931) displays a rugged beauty that is well projected in this performance, without softening the edges or Romanticizing the music’s contours...The late Steven Stucky’s Second Concerto for Orchestra is a brilliant showpiece, relished by these young musicians.

A great deal to admire, both in the music and the performances.