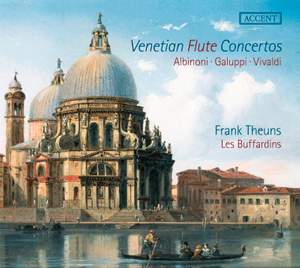 Flute Concerto in A Minor, RV 440: I. Allegro non molto

The most influential and prolific composer of concertos during the Baroque was the Venetian Antonio Vivaldi (1678-1741). He composed approximately 500 concertos for one or more soloists, including about 350 solo concertos. He was one of the first composers to focus on the transverse flute as a viable solo instrument.

Frank Theuns here combines one work (La notte, RV 439) from the famous opus 10 collection with the Concertos RV 440 and 441, both of which have survived as manuscripts in the Biblioteca Nazionale in Turin, Italy. The programme also contains concertos by Baldassare Galuppi – the manuscript of his Flute Concerto in D major (GroF 675) is preserved at the Mecklenburgische Landesbibliothek in Schwerin, Germany – and Tomaso Albinoni, whose Concerto in D minor from opus 9, originally written for oboe, is performed on this recording on the flute.