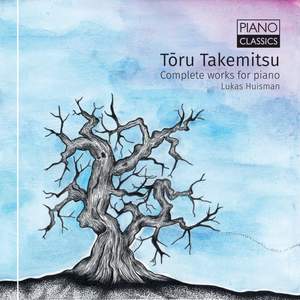 Piano Pieces for Children: No. 1. Breeze

Piano Pieces for Children: No. 2. Clouds

Saegirarenai kyusoku (Uninterrupted Rest): I. Slowly, sadly and as if to converse with

Takemitsu: De Brauwer: Something, Something: 'n' Rain 'n' Such

“Composing is giving meaning to that stream of sounds that penetrate the world we live in” , in short the credo of Toru Takemitsu.

Toru Takemitsu (1930-1996) is one of Japan’s foremost 20th century composers, an innovator combining elements of oriental and occidental philosophy to create a sound uniquely his own, fusing opposites together such as sound with silence, the east with the west.

Lukas Huisman is one of Belgium’s foremost pianists specializing in unusual and often contemporary repertoire. He successfully recorded for Piano Classics the Symphonic Nocturne by Sorabji.