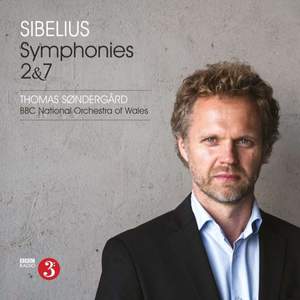 Since Thomas Søndergård’s opening concert with the BBC National Orchestra of Wales, this partnership has cultivated a special relationship with the music of Sibelius, resulting in three recordings of the composer’s music.

In 2017 they performed Symphonies 2 & 7 at the BBC Proms receiving widespread acclaim, with critics describing the performances as ‘radiant’, ‘masterful’ and ‘quite, quite beautiful’.

Prior to this first recording Søndergård made his excitement clear: ‘I can’t wait to discover Sibelius all over again with my new orchestra’.

With their nationalist themes Symphonies 2 & 7 were perfect repertoire for Søndergård and his orchestra to make their symphonic recording debut.

Symphony No. 2 marked a major step in Sibelius’ development as a composer, and remains one of his most popular works.

Symphony No. 7 is notable for being a one-movement symphony and is completely original in form, subtle in its handling of tempi, individual in its treatment of key and is considered Sibelius’ most remarkable compositional achievement.