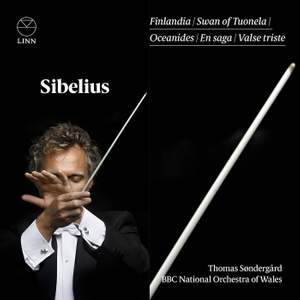 Søndergård’s approach conjures a pulsing energy of the kind which seems to well up from within the music itself, rather than being driven from without; he also has a canny awareness of how a... — BBC Music Magazine, October 2018, 5 out of 5 stars/3 out of 5 stars More…

Described as ‘one of the great new Sibelian teams’ (The Herald), Thomas Søndergård and BBC National Orchestra of Wales continue their shared fascination with the orchestral music of Sibelius.

Released one month after BBC NOW celebrates its ninetieth anniversary, this recording includes many of Sibelius’ most famous masterpieces. Sibelius established his credentials early on with the tonally adventurous En saga, which brings to mind the excellence of Berlioz’ orchestral writing.

Sibelius’ successful foray into the impressionistic tone world of Debussy resulted in the haunting seascape of The Oceanides. Sibelius wrote it was ‘pure inspiration’ that led to the composition of the perpetually popular Finlandia, with its world-famous hymn motif.

The wonderfully descriptive Swan of Tuonela finds Sibelius at his mystical best as he casts the cor anglais as the majestic swan from Finnish mythology.

Sibelius: Finlandia is a fitting finale to this Sibelius series which also includes critically acclaimed recordings of four of his symphonies.

Søndergård’s approach conjures a pulsing energy of the kind which seems to well up from within the music itself, rather than being driven from without; he also has a canny awareness of how a tiny, unobtrusive shift of pace now and again can make a whole Sibelian musical structure seem to come alive. The orchestral response has an expressive vividness and focus that is exceptional.

It’s the Ballade that comes off best: it trips along with a thrilling edge and the Linn sound makes the bass drum shake the floorboards.