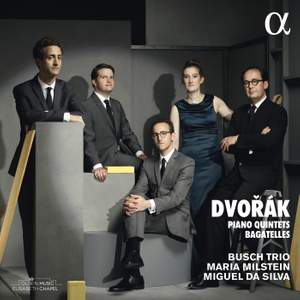 The sheer quality and naturalness of their music-making is deliciously demonstrated in the development section of the opening movement of the First Quintet of 1872…The main act here is the Second... — Gramophone Magazine, September 2018 More…

After two earlier Dvořák releases, the Trios nos.3 and 4 (Dumky) and the two Piano Quartets, Omri Epstein, Mathieu van Bellen and Ori Epstein are joined by one of their teachers at the Queen Elisabeth Music Chapel, the violist Miguel da Silva (founder member of the famous Quatuor Ysaÿe) and the violinist Maria Milstein, who was also an artist in residence at the Music Chapel from 2011 to 2014. Together they continue this recording of the Czech composer’s complete chamber music with keyboard, this time in the two Piano Quintets and the Bagatelles. There is an obvious close rapport between these musicians, who share with us their passion for this repertory and their enjoyment of playing together. A gap of fifteen years separates Dvořák’s two Piano Quintets, which have few features in common except a shared home key: the First marks the debut of a youthful composer, while the Second shows him at the peak of his art. The Bagatelles, originally scored for two violins, cello and harmonium, are among his best-known short pieces. A recording scheduled for release in autumn 2018 will complete this quadriptych of Dvořák’s piano trios, quartets and quintets.

The sheer quality and naturalness of their music-making is deliciously demonstrated in the development section of the opening movement of the First Quintet of 1872…The main act here is the Second Quintet…The opening cello theme tells us much about a group’s approach. The Busch’s Ori Epstein shapes it with care, allowing it to unfold unhurriedly, to which the other players respond with warmth…This is one of the best things I’ve yet heard from the Busch in their evolving Dvořák series.

If Dvorak hadn’t written his Second Piano Quintet (perish the thought!), would the first be played more often? Probably not...The Busch Trio, however, with Milstein and da Silva, play it with conviction, then rise to the beauties of the quintessentially Dvorakian Second Quintet.