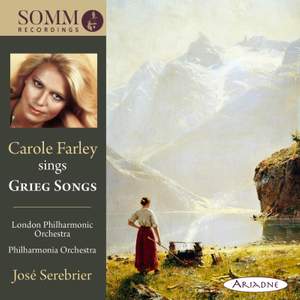 The songs themselves are really good ones and the performances are top class. Carole Farley is a fine advocate for Grieg and the orchestrations, expertly realised by two London orchestras under... — MusicWeb International, January 2021 More…

Somm Recordings launches its new re-issues and historical label, Ariadne, with a spell-binding collection of songs by Edvard Grieg performed by the legendary husband-and-wife team of soprano Carole Farley and Jose Serebrier conducting the London Philharmonic and Philharmonia orchestras. Released by Dinemec Classics in 1998, 'Carole Farley sings Grieg Songs' follows Somm's acclaimed recording of Grieg's Piano Concerto and Piano Concerto No. 2 (arranged and orchestrated by Robert Matthew-Walker) by Mark Bebbington. Sensational American soprano Carole Farley brings enormous passion and exquisite poetry to intensely personal songs originally composed for piano accompaniment but here richly orchestrated by Jose Serebrier. Sung in Norwegian (with Norwegian texts and English translations in the booklet) the sublime result showcases Grieg at his most evocative, Farley at her most expressive and Serebrier at his most nuanced. Jose Serebrier says: 'My choice of songs for orchestration was dictated primarily by the character of the writing. In most cases, the orchestration seemed so obvious, it almost literally jumped out of the page. I took great care to orchestrate them idiomatically'. Carole Farley says: 'The idea for this recording was to make these under-performed songs available to a wider public. The poetry is so very evocative and the marriage of the words and the music makes these songs absolutely unique'.

The songs themselves are really good ones and the performances are top class. Carole Farley is a fine advocate for Grieg and the orchestrations, expertly realised by two London orchestras under the watchful guidance of José Serebrier, add an extra dimension to Grieg’s inspiration.