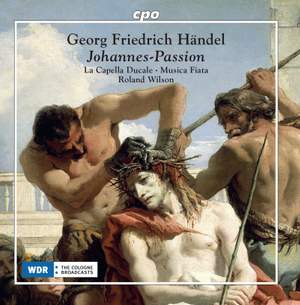 Roland Wilson enjoys great esteem as a trumpeter and a cornett player who performs with his own ensemble, and as a musicologist his name stands for the rediscovery of many an early music rarity. On CPO's new recording we hear two highly interesting works that once were (and today still are) ascribed to George Frideric Handel. Johann Mattheson, who was working on the setting of the same libretto in 1723, wrote a detailed review of this Passion probably first performed in 1704 and published anonymously. Although Mattheson does not mention the 'world-famous' man by name, his choice of words repeatedly offers clear references, for example, when he states that the inscription Pilate had put on the cross caused him 'new business' ('neue Händel'). Mattheson doubtless knew exactly who the composer was, and everything that he describes is a perfect match for Handel. There is a lot in the score that recalls the mature Handel while sounding very much like a young man who was then in quest of his individual style. The same applies to the chorale cantata 'Ach Herr, mich armen Sünder', a work certainly suggesting an even earlier date of composition. This new recording by the early music specialists of Musica Fiata and an ensemble of soloists bring this wonderful music to life with fantastic tonal homogeneity and balance, technical finesse, and historical knowledge.