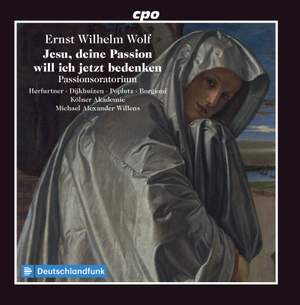 A very interesting and musically compelling addition to the discography of 18th-century music for Passiontide. — MusicWeb International, January 2019

Ernst Wilhelm Wolf's contemporaries called him the 'Weimar Wolf'; a fitting label, as Weimar's musical environment greatly influenced the life of this teacher, concertmaster, and organist who advanced to the post of chapel master to Duchess Anna Amalia, a noted patron of the arts. Even though he was a thorn in the side of Johann Wolfgang von Goethe, Germany's prince of poets, he remained true to the court and his duchess over the decades. He even declined an offer from the King of Prussia, Frederick II, to succeed Carl Philipp Emanuel Bach in Berlin. However, the fact that Wolf highly valued Bach's empfindsamer Stil and the style of the Berlin chapel master Carl Heinrich Graun is clearly audible in his works. During recent years Wolf's instrumental music has attracted increasing attention. Now Michael Alexander Willens has recorded Wolf's oratorio Jesu, deine Passion will ich jetzt bedenken. In this work, like Graun in his Tod Jesu, the composer, who in 1756 was only a little over twenty, reflects on the Passion of Christ and relives it with deep emotion.

A very interesting and musically compelling addition to the discography of 18th-century music for Passiontide.