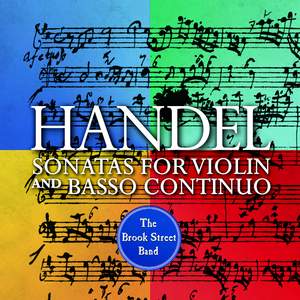 The Brook Street Band play all the works indisputably by Handel as well as those generally accepted as part of the canon…The music, dare I say it, is on occasion uneven in quality, but the finest... — BBC Music Magazine, August 2018, More…

Handel: Sonata in G major for violin and continuo, HWV358

The Brook Street Band's passion for the music of George Frideric Handel shines through on this recording of the nine Violin Sonatas by - or attributed to - the Baroque composer. The ensemble's 10th release for AVIE compliments its critically acclaimed and award-winning discography of a wide variety of Handel's chamber music and vocal works. Combining consummate artistry with characteristic inquisitiveness, The Brook Street Band - posing the question 'how many violin sonatas did Handel actually compose?' - offers nine works composed over a span of 40 years, from the German-born Handel's early years honing his style in Italy to his later years as a leading light in London. He composed some and his name has been variously ascribed by others, depending on which publisher was cashing in, perhaps in cahoots with the commercially-minded composer. But who really knows, and one could ask who cares, especially with music of such colour performed with such panache.

"vital and vivacious" - The Guardian on Handel Trios Sonatas (AV 2357)

"These performances have a powerful stamp of authority - Handel himself would have found real cause for celebration." - International Record Review on Handel's 'Cello' Sonatas (AV 2118)

"stylish and imaginative - Their pleasure in the music is infectious." - Gramophone Editor's Choice on Handel's 'Oxford' Water Music (AV 0028)

The Brook Street Band play all the works indisputably by Handel as well as those generally accepted as part of the canon…The music, dare I say it, is on occasion uneven in quality, but the finest music of which there is much reaches a peak with the D major Sonata, HWV371, coming across with natural grace and effective articulation.

It is erudite, intimate music, not without violinistic fireworks...Rachel Harris delivers these eloquent expressions of the violinist’s art with stylish sweetness, her embellishments beautifully measured.