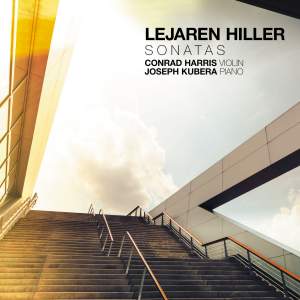 Hiller, L: Sonata No. 3 For Violin And Piano

Hiller, L: Sonata No. 2 For Violin And Piano

Lejaren Hiller (1924-1994) is, understandably, best known for his computer-assisted compositions and works utilizing electronics. The three pieces included in this collection span a crucial fifteen-year period in Hiller's career.

The first was written two years before Quartet No. 4 for Strings, The ILLIAC Suite. The second work was written three years into his time as a music professor at the University of Illinois, while the final sonata in this collection was written during his second year at the State University of New York at Buffalo.

Notwithstanding Hiller's notoriety for his computer-composed and electronic pieces, more than 60 percent of his output can be characterized as pieces of absolute music, that is, music that is almost entirely self-referential. Of the forty-some pieces of absolute music that Hiller composed, ten of them are sonatas. All but one are for piano, piano and violin, or piano and cello. Given Hiller's propensity for writing absolute music, it could be argued that these three compositions are more representative of his compositional oeuvre than other recorded assemblages of his music.

Sonata No. 2 for Violin and Piano (1955) initially started off as a work for cello and piano, but after most of it had been completed, Hiller decided to rewrite it for violin and piano, keeping the cello and piano version available for performance as well. This often Ravel-esque work is tonally advanced and somewhat unusual in its design.

Hiller remarked that his Sonata No. 5 for Piano (1961), in four movements, makes use of an all-interval row, adding that it is not a twelve-tone row, as the note C-flat is omitted, and the note F appears twice. He also noted that the third movement incorporates some processes of order and disorder fluctuation and that the final movement is quoted in two of the harpsichord solos of HPSCHD.

Like the second sonata, Sonata No. 3 for Violin and Piano (1971) uses a traditional fast-slow-fast movement design. After this, the differences evaporate rapidly. The third sonata bridges the world of modernism and post-modernity to an extent. In general, the work uses post-tonal material emphasizing tone clusters, sevenths, and, to a lesser extent, fifths and tritones. Furthermore, the piece features many of the hallmarks heard in Hiller?s other modernistic pieces, namely numeric patterns, symmetrical structures, and building progressions.