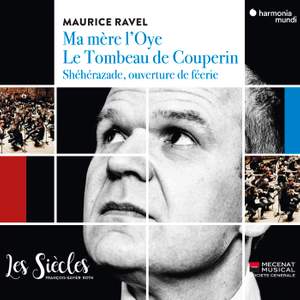 The instruments gathered by Les Siècles bring a delicious transparency, so that there is both greater distinctiveness in the instrumental colours and a more satisfying blend than tends to be... — BBC Music Magazine, June 2018, 3 out of 5 stars More… 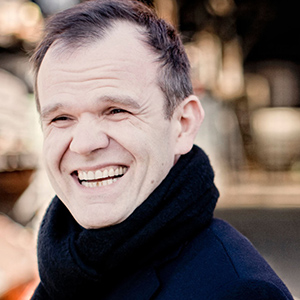 Recording of the Week,  Ravel from François-Xavier Roth and Les Siècles

The conductor and his period-instrument orchestra conjure a world of enchantments in two scores inspired by fairy-tales: Ma mère l’Oye (Mother Goose) and the early Shéhérazade overture.

In this recording, it’s interesting to compare the two works for so-called ‘small orchestra’, Le Tombeau de Couperin and Ma mère l’Oye. For, when discussing Ravel’s orchestral music, one thinks more readily of the large symphony orchestra in all its luxuriance, of the teeming array of percussion, which often requires a timpanist and seven percussionists. In these two pieces, the orchestration is deliberately reduced, for two very different reasons. In one case, Ravel was writing with an eye to childhood – indeed, to children themselves – with Ma mère l’Oye; in the other, he was composing Le Tombeau de Couperin in homage to his friends who had been killed in the war. So we’re looking here at composition in two totally different sets of circumstances.

Ma mère l’Oye is a cycle of pieces originally written for piano played by four childish hands. The version we have recorded with Les Siècles is an orchestration to which Ravel added transitions and a tableau (Danse du rouet et scène) in order to create a ballet, premiered in 1912 at the Théâtre des Arts. Le Tombeau de Couperin is a tribute to French Baroque music, in which each piece clearly refers to a dance of that period. The French music of the seventeenth and eighteenth centuries had been brought back into fashion by Camille Saint-Saëns, among others, shortly before Ravel’s musical education began. He seized on this repertory, and here he produced a work of an entirely novel kind. As is always the case with Ravel, each work is an experiment, a sort of unique diamond, without an earlier model. These are genuine études on Baroque dance, with each piece presenting a tempo, a rhythm, a melodic and harmonic language of its own, like an étude by Chopin. Imbued with nostalgia and great melancholy, but also vivacity and virtuosity, this music offers a new role to the wind instruments and especially the woodwind, which Ravel set about transcending. This new role for the wind instruments was of decisive importance in the evolution of their playing style in the course of the twentieth century.

Shéhérazade, ouverture de féerie is a more rarely performed work, because it dates from much earlier in Ravel’s career.

Yet it’s very touching to hear the young composer writing for large orchestra in this overture and undertaking experiments with orchestral textures that he was later to use in Daphnis et Chloé or La Valse.

Naturally, we play all these works on the instruments that Ravel knew; these French-built instruments of the late nineteenth or early twentieth century are here often placed under great strain, pushed to their furthest limits of virtuosity and dynamics, as for example with the oboe in Le Tombeau de Couperin. We find in this music the fragility and urgency that Ravel quite deliberately aimed to achieve, with his detailed knowledge of the French style of wind-instrument making. For their part, the gut strings still used at that time contribute their silky, enveloping sonority and their incisive attack and articulation. F-X Roth

The instruments gathered by Les Siècles bring a delicious transparency, so that there is both greater distinctiveness in the instrumental colours and a more satisfying blend than tends to be achieved on current instruments…Overall it is wonderful to hear Ravel’s textures anew, but these performances are instructive rather than compelling.

The softer-grained timbres of Roth’s gut strings and narrow-bore winds make their presence keenly felt...we’re truly in a world of childhood and enchantments, and the mellow timbre of the nineteenth-century contrabassoon and clarinets render the later dialogue of Beauty and the Beast as something infinitely touching and tender rather than grotesquely caricatured... The period-instrument pay-offs continue through Le tombeau, where the neo-Classical elements of the work leap to the fore.

The period band give the texture a transparency that never seems contrived...A treat.

The music is mostly divine...The instruments are another delight (particularly the winds, gorgeously warm with dusky tints), and help us listen with fresh ears to some of the most touching and companionable music ever written.