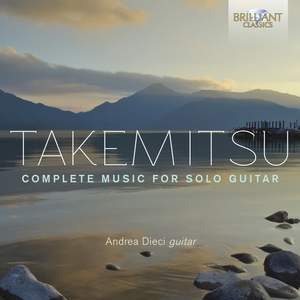 Takemitsu’s oeuvre often features the guitar, vehicle par excellence for his distinctive kind of soft-hued, post-Debussyan reverie, his teasing of tonality to the edge of the atonal...Dieci,... — The Times, 23rd July 2018 More…

Takemitsu: All in Twilight, four pieces for guitar

Takemitsu: A piece for guitar

Takemitsu: In the Woods - Three pieces for guitar

I. Wainscot Pond (after a painting by Cornelia Foss)

No. 2. Over the Rainbow (Harold Arlen)

No. 4. A Song of Early Spring (Akira Nakada)

No. 8. Here, There and Everywhere (John Lennon and Paul McCartney)

No. 12. The International (Pierre Degeyter)

The idiom of Toru Takemitsu fits the classical guitar like a tailored suit of pure lines where simplicity conceals the thought and art behind their design. The range of sonority is wide yet subtle in the set of three Folios (1974) which became his first work for the instrument, yet their brevity is out of all proportion to the care taken in their construction, and they quickly made their composer renowned, along with Henze, as one of the most refined composers for the instrument in the second half of the last century. Takemitsu’s explanation of the title was characteristically laconic: ‘just two facing pages, short pieces, no more than that.’ Within the third of them is buried a quotation from a chorale used by Bach in the St Matthew Passion, hinting at a grave character that is shared by the more overtly Hispanic figuration of the second movement.

From 13 years later, the four movements of All in Twilight are an impressionistic evocation in sound of a painting of the same name by Paul Klee. Takemitsu’s fondness for bell-like sonorities returns in the minute-long tribute to the composer Sylvano Bussotti on his 60th birthday. Landscape and painting stimulated the composer’s imagination in two more guitar pieces: Equinox, he explained, was inspired by the painting of the same name by the Catalan painter, Joan Miró (1967). ‘During the equinox the length of day and night are the same and the title has some relationship to musical proportions and the harmonic pitch interval within the composition, but no literary meaning.’

In the Woods was Takemitsu’s very last composition, completed in November 1995, three months before his death. This three-movement suite opens with Wainscot Pond, after a painting of Cornelia Foss – a tone-painting in his late style which is pared back to harmonic essentials and returns to a diatonic harmony that he never quite forsook at his most avant-garde.

Takemitsu’s oeuvre often features the guitar, vehicle par excellence for his distinctive kind of soft-hued, post-Debussyan reverie, his teasing of tonality to the edge of the atonal...Dieci, playing a guitar that once belonged to Segovia, ends his enchanting programme with the 1977 transcriptions of 12 Songs (among them Hey Jude) and The Last Waltz (1983)