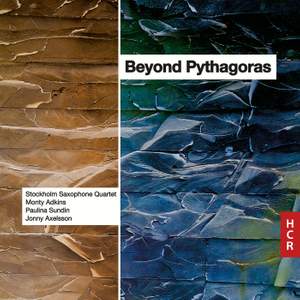 Beyond Pythagoras is the result of a five-year collaborative project between composers Paulina Sundin and Monty Adkins, exploring a new method for developing harmony in electroacoustic music inspired by the writings and techniques of William A. Sethares. The project emerged from Sundin’s exploration of Sethares’s writings from the early 90s which formalised the relationship between the notes of a tuning system, the partials of a timbre, and their relationship to sensory consonance. Sethares’s work facilitates the construction of bespoke microtonal scales from an analysis of instrumental sounds whilst retaining a coherent sense of consonance. As author Luca Turin wrote of Sethares’s work, “Physics had built a prison round music, and Sethares set it free.”

The works on display here, realised over a four-year period, present a dynamic and dramatic exploration of Sethares’s thinking. From the formal rigour of ‘Emergence’, to the intricate harmonic development of ‘Splintered Echoes’, these pieces demonstrate a detailed and colourful sense of sound design allied with a meticulous structural balance – immersive, patient, timbrally rich, and often quite elegant, with intricate interplay between the acoustic and electronic sound sources.

In addition to the electronic contributions of Sundin and Adkins, this recording brings together two of Sweden’s greatest proponents of new music. Percussionist Jonny Axelsson has performed new and contemporary music from a plethora of composers worldwide, ranging from works for ice percussion in the Arctic to an on-going twenty-year collaboration with composer Kevin Volans. The Stockholm Saxophone Quartet are ceaseless educators and travellers, having commissioned over 500 new works across their career, and whose Stockholm studio serves as an important meeting-point for musicians, composers, artists, choreographers and writers.