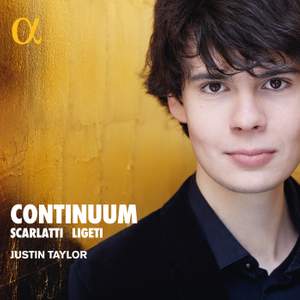 Music for Harpsichord by Scarlatti & Ligeti

Following his First Prize at the Bruges Competition and his first album, devoted to the Forqueray family (Choc of the Year in Classica, Editor’s Choice in Gramophone, Grand Prix de l’Académie Charles Cros), the Franco American harpsichordist Justin Taylor has recently been awarded the Révélation Musicale Prize of the French Critics’ Circle. His career has developed rapidly, both as soloist (harpsichordist and also fortepianist) and as director of his ensemble, the Taylor Consort, with which Alpha will soon be recording... For his second recital, Justin Taylor juxtaposes Scarlatti and Ligeti, two composers whose periods and universes seem so remote from each other, yet who show numerous affinities: in their inventiveness, the virtuosity of their respective languages and their common urge to push the keyboard to its very limits.

Continuum builds a bridgehead between these two hypersensitive composers by intertwining Ligeti’s three emblematic (and spectacular!) pieces for solo harpsichord with sonatas by Scarlatti.

This disc from rising French harpsichordist Justin Taylor finds a perfect partner for the quirky Italian…The Scarlatti sonatas are almost all relatively familiar ones…but Taylor ensures that they sound fresh. With a technique both neat and quick, he spins the music in smoothly contoured paragraphs, adding tightly curling ornamentation here and there but without hindering the music’s natural flow and rolling energy…This disc is an exhilarating vindication of the harpsichord as a solo instrument for music old and new.