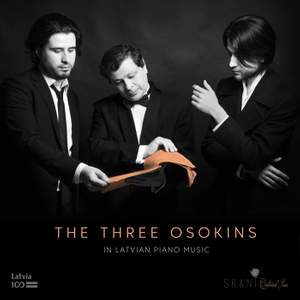 The 3 Osokins in Latvian Piano Music

Vasks: Music for a Summer Evening

”It was very important for us, specifically for the Latvia’s centenary, to show our country’s music in all of its splendour and diversity and to prove that Latvia is a global force in the realm of classical music. We recorded as-yet undiscovered masterpieces and also well-known compositions of piano music. The first category definitely includes Janis Zalitis’ compositions for piano, Jazeps Vitols’ Berceuse and Janis Ivanovs’ later preludes. To the second category belong Vitols’ Song of the Waves, Peteris Vasks’ compositions from The Seasons cycle and Arturs Maskats’ wonderful piano poem Kazbegi: Tsminda-Sameba, which is dedicated to us and inspired by the composer’s journey to Georgia. And, of course, Adolfs Skulte’s Arietta...” - Sergejs, Andrejs and Georgijs Osokins.