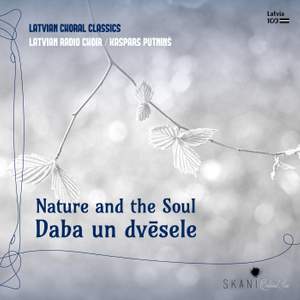 Melngailis: Nature and the Soul

I. Move Gently and Quietly

III. The Sun is Setting

Zālīts: The Goblet on the Isle of the Dead

Graubiņš: Night Has Entered the Forest

Vitols: The Day Is Ending

Vitols: The Dwarves and the Old Man of the Forest

Vitols: The King and the Mushroom

The wonderful works chosen for this album, each one with its own story and distinct character, collectively create something reminiscent of a dear childhood home to which we need to return from time to time. The Latvian Radio Choir beautifully performs these Latvian choral classics by Vitols. Darzins, Melngailis, Zalitis and Graubins.

’The majority of Latvia’s choral conductors have likely grown up with these songs whose imagery, sound and colour are deeply encoded in our consciousness, perhaps to a much greater extent than we realise. The subdued northern nature that bursts into a lavish display at the height of summer and the “various emotional states of the soul”, as Emils Darzins described the subjects that interested him in music. - Kaspars Putnins

’Anyone lucky enough to have heard last Sunday’s celebration of the music of Rachmaninov at the BBC Proms couldn’t help but be impressed by the meticulous singing of the Latvian Radio Choir. Now, to mark Latvia’s forthcoming centenary, it has released a recording of compositions from its homeland where once again we can savour its miraculously cohesive sound. Featuring a pure soprano line and sonorously rich basses, the choir charts a path through the development of Latvian choral music, majoring on the works of Jazeps Vitols (1863-1948), whose extended masterwork, David Before Saul is a highlight, rivalled by Emilis Melngailis’s heartbreaking Move Gently and Quietly.’ - Stephen Pritchard, The Observer

EDITOR’S CHOICE ‘This is a truly beautiful album of Latvian choral works performed by singers clearly immersed in its musical and cultural foundations.’ --Martin Cullingford, Gramophone

’This Latvian programme whisks us away to landscapes of enchanted forests and never-ending sunsets, thanks to a stunning performance by the Latvian Radio Choir.’ - BBC Music Magazine