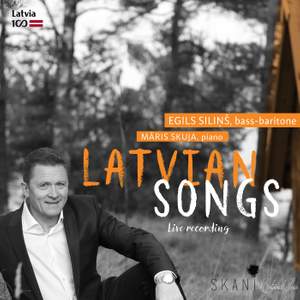 Darzins, E: Tell Me the Hour, the Moment

Darzins, E: When All Tears Will Have Been Shed

Darzins, E: In Defiance of Pain

Darzins, E: As If by Stealth

Kalniņš, J: For Every Hour

Vitols: Below Your High, White Window

Vitols: In a White Birch Cradle

Vitols: The Goblet on the Isle of the Dead

Vitols: The Sound of Kokles

Vitols: Close Your Eyes and Smile

One of the famed wagnerian bass-baritones of our age, Egils Silins, sings romantic art songs by Latvian composers in recital, accompanied by Maris Skuja.

”It is a poetry of longing, an unsatisfiable longing for tranquillity, home, homeland, something unattainable and unsummonable, a longing for lost happiness and love.” Emils Darzins

Latvian bass-baritone Egils Silins made his Royal Opera debut in 2011 as the Dutchman (Der fliegende Hollander). He has since returned to sing Jokanaan (Salome) for The Royal Opera. Silins studied at the Latvian Academy of Music.

Reviews: ‘This collection of Latvian songs is a rewarding experience. Egils Silins has a wonderfully fresh voice which proves to be perfect for his repertoire. From the dark basss tonest o the almost tenorish heights, it hat a consistent beauty over a wide range of various feelings.’ --Pizzicato