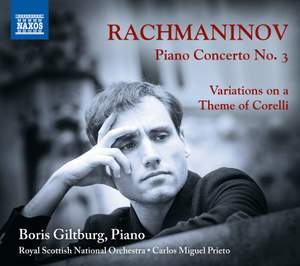 Rachmaninov: Piano Concerto No.3 & Variations on a Theme of Corelli

[Giltburg] delivers one of the most structurally lucid accounts of the Concerto that I’ve heard. Apart from his clear sense of direction…I also admire his capacity to create a sense of spontaneity... — BBC Music Magazine, July 2018, 4 out of 5 stars More…

Rachmaninov’s ‘Piano Concerto No. 3’ is a complex, epic narrative that moves from a simple opening melody to the triumphant apotheosis at its conclusion. The composer ingeniously links motifs, melodies and at times whole sections between the movements, unifying the concerto into a single overarching storyline. In the ‘Variations on a Theme of Correlli,’ Rachmaninov reworks the original theme using his unique harmonic language until there is no trace left of its Baroque or Renaissance origins. Pianist Boris Giltburg was born in 1984 in Moscow and has lived in Tel Aviv since early childhood. He began lessons with his mother at the age of five and went on to study with Arie Vardi. In 2013 he took first prize at the Queen Elisabeth Competition, catapulting his career to a new level. His previous solo Rachmaninov recording was named Gramophone album of the month in June 2016, and more recently his first concerto album won a Diapason d’or for his account of the Shostakovich concertos.

[Giltburg] delivers one of the most structurally lucid accounts of the Concerto that I’ve heard. Apart from his clear sense of direction…I also admire his capacity to create a sense of spontaneity in the narrative, particularly in those many passages where soulful lyricism unexpectedly gives way to playful frolics. But it’s his mastery of the work’s numerous climaxes that really impresses.

[Giltburg’s new recording] shatters the encrustation of reputational habit, offering instead a vividly imaginative re creation of a score that lives and breathes with irresistible vitality. Giltburg’s approach is fundamentally lyrical, rhetorically apt and, aided and abetted by Prieto and the Scots, sensitive to every marking in the score…[He] gives us thoughtfully conceived rhetoric, with an unerring focus on Rachmaninov’s shrewd harmonic movement rather than a succession of dazzling figuration.

Giltburg’s and Prieto’s rapport is manifested throughout, with some fascinating interpretative decisions and immaculate accompaniment by the Royal Scottish National Orchestra, who seem to be in a golden age of performance and recording. The coupling of Correli Variations is perfect, as is Gilburg’s rendition of this wonderful piece. The sound is first rate, too.

There’s a distinctly filmic quality to much of the orchestral playing on this second instalment of Boris Giltburg’s Rachmaninov project on Naxos, particularly in the big tuttis of the first movement, which is awash with Matnovani-ish vibrato and portamento; the Russian pianist’s comparatively detached, cleanly articulated phrasing is the perfect foil, and his muscular Corelli Variations are a treat.

Aside from his technical dexterity, the chief glory in his account of Rachmaninov’s Concerto No 3...is the performance’s overarching sweep. Whatever the mood, pensive or muscular, dark-toned or brilliant, the notes keep flowing, intricately patterned with echoing gestures and hidden variations.

With a lean, chamber- like accompanying sound from the orchestra- the strings often playing almost without vibrato- the whole album feels utterly fresh and surprising.