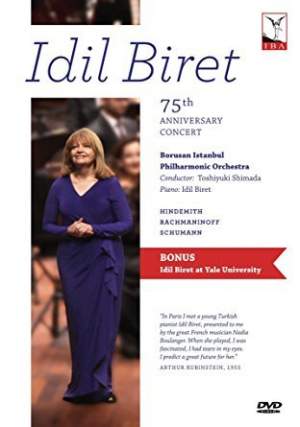 Hindemith: Concerto for Piano and Orchestra

This DVD contains the live recording of Idil Biret’s 75th anniversary concert in Istanbul in November 2016 at the 2500-seat L. Kirdar Hall. Hindemith’s Piano Concerto (1945) and Rachmaninov’s Rhapsody on a Theme of Paganini were on the program. The conductor is Toshi Shimada, who also conducted the same Hindemith concerto Idil Biret played at Carnegie Hall, New York in April of the same year. As bonus are included Biret’s performances of Hindemith’s The Four Temperaments and Liszt’s Piano Concerto No. 1 with the Yale Symphony Orchestra under the baton of Shimada at the Woolsey Hall of Yale University in 2012. Finally, there is a documentary on the making of the recording of all the five Hindemith works for piano and orchestra by Idil Biret with YSO/Shimada released on 2 CDs by Naxos in 2013, titled “Idil Biret at Yale University”.