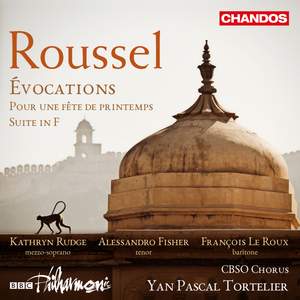 This is a wonderful treat…Tortelier draws a detailed, yet marvellously atmospheric performance from the BBC Philharmonic, perfectly judging the balance between moments of luxuriance and the need... — BBC Music Magazine, July 2018, More…

Maestro Yan Pascal Tortelier celebrates his twenty five-year recording career and seventy-album discography on Chandos with this album of three of Roussel's most remarkable compositions. It follows a highly praised Birmingham concert with the same forces, namely the exceptional BBCPO and CBSO Chorus, and three revelatory soloists: Kathryn Rudge, 2017 BBC New Generation Artist, the young tenor Alessandro Fisher, joint first prize winner at the 2016 Kathleen Ferrier Awards, and François Le Roux, famous for his award-winning performances of French operas. Although very rarely recorded, Evocations stands as a monument in the compositional life of Roussel, depicting scenes, sounds, and colours from his experiences of India. Also featured are the audacious Pour une fete de printemps, originally composed as a Scherzo for his controversial Second Symphony, and the later Suite in F, which was performed in Paris several times after its Boston premiere, to critical acclaim.

This is a wonderful treat…Tortelier draws a detailed, yet marvellously atmospheric performance from the BBC Philharmonic, perfectly judging the balance between moments of luxuriance and the need to keep the pace moving. In the final movement, soloists Kathryn Rudge, Alessandro Fisher and François le Roux are utterly idiomatic, while the CBSO chorus, shimmering in the numerous wordless passages, is in especially fine voice.

There’s so much Hollywood-style sheen and swagger to these performances that on first hearing I assumed I was listening to the John Wilson Orchestra. The CBSO Chorus are mightily impressive in the long Daphnis et Chloéesque final movement of the exotic Évocations, as are the three soloists – particularly baritone François Le Roux, who brings off some unexpected opera buffa-style patter with élan.

Tortelier is in his element in such music, and he consistently obtains playing of impressive refinement from the orchestra of which he used to be chief conductor, as well as bringing surging energy to the Suite’s motor rhythms.