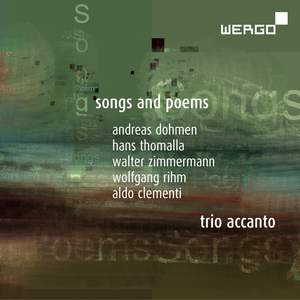 The trio admirably presenting itself here is the unusual combination of piano (Nicolas Hodges), sax (Marcus Weiss) and percussion (Christian Dierstein), and the stylistic orientation is European... — Sunday Times, 7th May 2018 More…

Zimmermann, W: as I was walking I came upon chance

Songs and Poems is a title that promises quite a lot: there are neither songs nor poems in the usual sense among these five instrumental compositions for the Trio Accanto: there is no singing in Hans Thomalla’s Lied, Aldo Clementi celebrates the art of instrumental counterpoint, and if Wolfgang Rihm’s Gegenstück were a song, it would be a manifesto against vocality. At least the title of Walter Zimmermann’s trio is based on a poem by Robert Creeley, but the words are not heard in the piece. Also, the audience does not need to be aware of the Baroque verse structures upon which Andreas Dohmen based his work commissioned by the group.

The title Songs and Poems nevertheless points in a certain direction. It reflects an underlying longing in these instrumental pieces for language, voice, and song, for the authenticity of singing, the simplicity of song, and the hidden meanings of poetry. Perhaps Songs and Poems is a song collection that only dreams of songs, just as the Trio Accanto – with its unusual instrumentation of saxophone, percussion, and piano – is a jazz trio that does not play jazz.

The trio admirably presenting itself here is the unusual combination of piano (Nicolas Hodges), sax (Marcus Weiss) and percussion (Christian Dierstein), and the stylistic orientation is European late modernism, rather than any vibraphone-inflected reminiscence of the Modern Jazz Quartet.