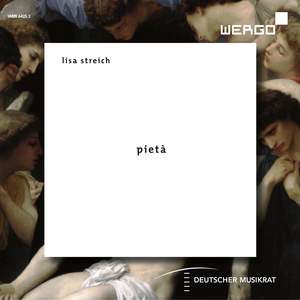 The enigmatic beginning of Lisa Streich's portrait CD in the series EDITION ZEITGENOSSISCHE MUSIK lays the cornerstone for a sound journey, oscillating between this world and the hereafter. In the booklet, Rainer Nonnenmann describes an inventive musical cosmos, whose unity develops only of alleged contradictions: 'Lisa Streich's music has a captivating beauty, at once earnest and playful, strong and meaningful, physical, cruel and tender. It gives us much to feel and think about. It is multi-voiced, ambivalent, incongruous, poetic and profane, as fraught with contradictions as is life itself. It is music of this world, and yet it is not'. To create a wide musical spectrum, the Swedish composer uses a variety of instrumentation: ranging from duo, to ensemble and choir, to orchestra. The five pieces have been especially recorded for this CD by ensemble recherche, hand werk and UT insieme vocale-consonante, among others. Different production conditions also correspond to the musical diversity: three of the CD's compositions were recorded at regular venues, whereas the recordings of the vocal works took place in the Cologne Cathedral and the Roman church of Santa Maria in Campitelli.