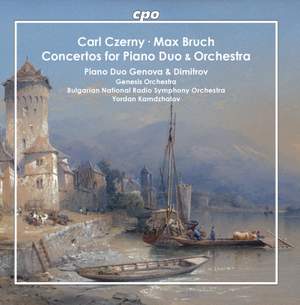 The Genova & Dimitrov Piano Duo was awarded the Echo Klassik in 2017 for the CD Bela Bartok und Viktor Babin – Concertos for Two Pianos (cpo) with the Bulgarian National Radio Symphony Orchestra under the conductor Yordan Kamdzhalov. And the new release by these artists is destined to become another one of their highlights: concertos for piano duo by Carl Czerny and Max Bruch. Carl Czerny and Max Bruch in one program? At first glance this is a very improbable encounter inasmuch these two names suggest the opposite ends of the musical spectrum. On the one side, an even-tempered master of piano courses and etudes with a virtually baroque self-understanding enabling him to compose everything for which he received an order; on the other side, a fiery arch-romanticist for whom every work involved a struggle with demons. And yet these extreme positions from the nineteenth century fit together perfectly. Here we have a concerto for four hands for a social occasion, there we have a panoramic pictorial suite for two virtuoso pianists, and in the middle there is a rarity with which the young Max Bruch referred to a genius without whom neither he nor Carl Czerny would have become what they became: to Johann Sebastian Bach.