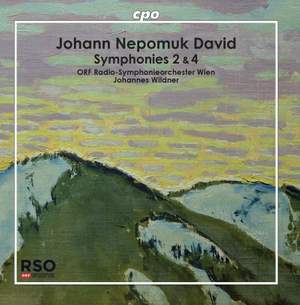 At long last and after a long wait: more symphonies by Johann Nepomuk David on cpo! 'What a great master! He dealt sovereignly with counterpoint and polyphony; his works are so richly nuanced instrumentally, of such memorable motivic design, that one just has to be captivated while listening.' This is what Concerti wrote after the release of his Symphonies Nos. 1 and 6. And the Symphonies Nos. 2 and 4 also demonstrate that Johann Nepomuk David was one of the leading Austrian composers who pursued a harmonic path all of his own. Although David takes an intellectual approach, he never fails to offer sensuous moments of fascination. Accordingly, the character of Symphony No. 2 is distinguished not only by great vitality but also by a vital musical imagination. There are three themes (instead of two, as in the tradition of the Viennese classical composers), and their derivation and further elaboration no longer occur dialectically but purely contrapuntally, that is, linearly, on the basis of mutual links (sometimes between all three themes at high points), derivations, and combinations.