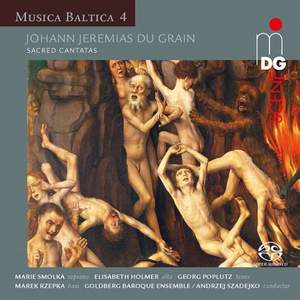 Musica Baltica Volume 4 Johann Jeremias Du Grain was on familiar terms with the musical greats of his era. He learned the musical trade from Telemann, who was already famous at the time, and he assisted the very busy Handel with the composition of a festive cantata for the five hundredth anniversary of Elbing, his chosen place of residence. One hears traces of these illustrious surroundings in Du Grain's own cantatas, which Andrzej Szadejko and the Goldberg Baroque Ensemble are now presenting for the first time on this audiophile multichannel release in the Musica Baltica series. Du Grain's cantatas not only represent the very best of their times; they are also extraordinarily appealing. Virtuoso arias, splendid choral numbers, and highly expressive laments operate on the same high level as the music of the great masters. Like the other titles in the Musica Baltica series, this newest release has been produced with the full benefit of Super Audio CD technology. The mighty dimensions of Gdansk's Trinity Church are represented in three-dimensional sound just as they truly are in real life, and when the music of the soloists, choir, and instruments of the Goldberg Baroque Ensemble fills the church's interior space, a top-quality musical experience is the guaranteed result.