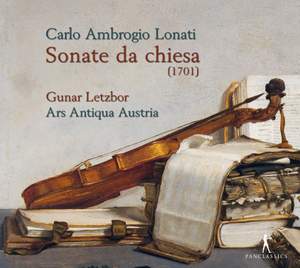 Lonati: Violin Sonata No. 6 in A Minor

Carlo Ambrogio Lonati, a flamboyant character from Italy’s violin scene, was born in Milan and moved to Rome at age 25, where he became known as the “hunchback of the Queen” Christina of Sweden. His stature predestined him as a singer for roles of gnomes and dwarves in Rome’s opera scene.

Corelli played for a few years in the orchestra directed by Lonati, its concertmaster. One can only marvel at the fact that the virtuoso didn’t publish his collection of 12 sonatas (with 6 “Sonate da camera” and 6 “Sonate da chiesa”) before the year 1701, possibly motivated by the success of Corelli’s own violin sonatas (1701). At his point in time however, Lonati’s compositions were already a few years old and had been copied a number of times. Had he published his works at the time of their creation, his success would have been distinctly greater. Lonati’s virtuosity comes close to that of H.I.F. Biber. The power of expression in his music is surprising, although he cannot disavow the sunny origins of his Italian soul.

After the volume dedicated to the "Sonate da camera” (PC 10363), we herewith present the “Sonate da chiesa”.