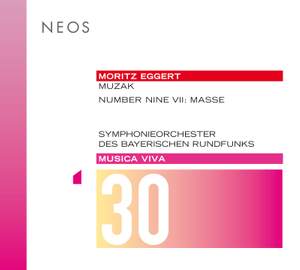 What musical means and forms can be used today when composing orchestral music? Composer Moritz Eggert poses this question in the two works of this release, which are live recordings of the world premiere performances.

Muzak for voice and orchestra was composed in memory of David Bowie, who died in 2016. A modified version of the word "music," Muzak refers to the background music commonly played on elevators, department stores and hotels. In Muzak Eggert seeks to include the entire sound world of his own time in a single composition. Muzak is therefore a distillation of all kinds of music, from pop music to classical repertoire, and addresses the question of whether boundaries between genres are still viable and make any sense.

In Number Nine VII: Masse Eggert takes up the aesthetic challenge of composing a work for orchestra where all musicians play continuously without a break.