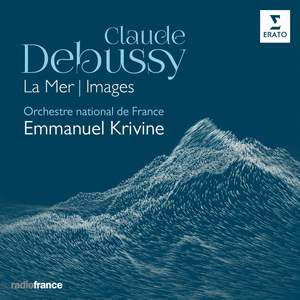 This is an excellent performance [of La mer], tautly focused, as is Krivine’s way, yet propulsive and flowing in its sense of the music’s organic evolution and internal logic. There’s real mystery... — Gramophone Magazine, June 2018 More…

Debussy began composing La Mer in 1904, in Burgundy, but as he wrote to fellow composer André Messager, his memories of the sea were “worth more than a reality whose charm generally weighs too heavily on the imagination”. He continued to work on the score, however, while staying in Jersey, and then in Dieppe. For Debussy, even less than for the Beethoven of the “Pastoral” Symphony, writing about nature does not mean naïvelyimitating it by portraying the elements or the meteorological phenomena that animate them; descriptive music suits neither the flexibility of his music nor his creative temperament. Instead, he invents, he responds to nature through his art, setting up something else in contrast to it.

By contrast, “Dialogue du vent et de la mer” (which Debussy originally entitled “Le vent fait danser la mer”) is more dramatic, more affirmative, and therefore less sparkling. Shimmering haze is replaced by powerful impulse. The music sweeps along with a sense of violent ecstasy, reflecting the composer’s lifelong love of the sea. La Mer was premiered on 15 October 1905 at the Concerts Lamoureux, conducted by Camille Chevillard. Debussy did later decide to change one short section of its finale, however: there was originally a fanfare in bars 237–244 which he decided was inappropriate, cutting it when he revised the score in 1909 for a new edition. This recording, based on the final version, also includes an excerpt of “Dialogue du vent et de la mer” that does feature the fanfare.

This is an excellent performance [of La mer], tautly focused, as is Krivine’s way, yet propulsive and flowing in its sense of the music’s organic evolution and internal logic. There’s real mystery at the start and genuine grandeur when we reach the first movement’s noontide climax…In both works the playing is at once pristine and virtuoso, while the sound, whether on disc or download, is almost blindingly clear. It’s a fine achievement.