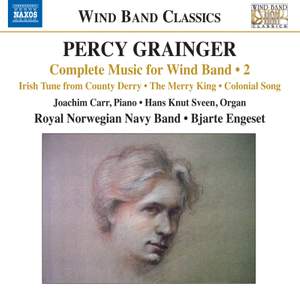 Grainger: Children's March 'Over the Hills and Far Away'

4-Note Pavan (After A. Ferrabosco II) [Version for Wind Ensemble]

Percy Grainger admired the expressive intensity of the wind band and considered it a more suitable medium for the transcription of early music – such as the Bach and Ferrabosco pieces heard here – than the symphony orchestra. In this second volume of his music for wind ensemble (Volume 1 is on 8573679) there are further examples from the 23 Chosen Gems for Winds, full of his unique elastic scoring, as well as two versions of the Irish Tune from County Derry, one of his most beloved works, and a world premiere recording of Grainger’s arrangement of his friend Herman Sandby’s lovely Intermezzo.