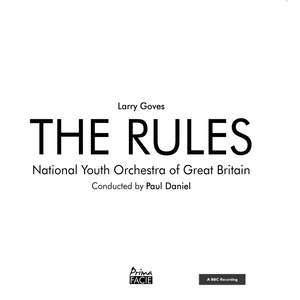 'The Rules' is a ground-breaking composition by Manchester based composer Larry Goves and is performed on this EP by The National Youth Orchestra of Great Britain, conducted by Paul Daniel.

Though only commissioned in 2014, you could say Larry Goves' new piece for the orchestra has been brewing since 2009 when he came aboard to coach the NYO's young composers. Since then, having this cosmic orchestra close by has surely given Larry food for thought. He says "the starting point was: what might it take to update Young Person's Guide To The Orchestra for the NYO? Having worked with them several years, I know the orchestra's far too clever for me to serve them something straightforward; when it comes to that particular piece, they would all be able to use it to teach me.' Instead, Larry wanted to write something respectful of today's players, feeding their voracious appetite for challenge and virtuosity, giving them almost an adventure playground in which to explore the conventions, rites and rules of orchestral music-making."

The National Youth Orchestra of Great Britain (NYO) is the world's greatest orchestra of teenagers. Founded in 1948 to provide orchestral performance opportunities for the brightest and most committed musicians between the ages of 13 and 19 and with an average age of just 16, no other orchestra in the world has consistently achieved such brilliance in performance with such young musicians. Many of the UK's greatest musicians, past and present, are NYO alumni, including Sir Simon Rattle, Sir Mark Elder, Judith Weir, Thomas Adès and Alison Balsom. The Orchestra's huge, ongoing contribution to British musical life was acknowledged when it received The Queen's Medal for Music 2012 and the Ensemble Award at the RPS Music Awards 2016.