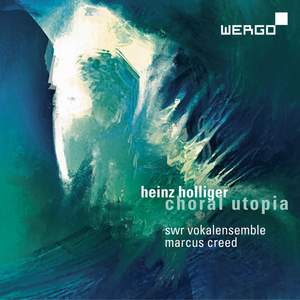 The Swiss Heinz Holliger will be 80 next year, so this CD is timely. Well known as an oboist of extraordinary virtuosity, he is also an equally distinguished composer. This CD brings together... — Choir & Organ, July 2018, More…

I need a musical discourse', Holliger once said. This is a good description of his characteristic way of composing. Unlike Boulez, he does not base his works on charts and tables, but neither does he employ carpets of sound in the manner of Ligeti or the Spectralists. Particularly in his vocal works, Holliger allows himself to follow the associations suggested by certain words, and these associations in turn generate other connections. Shir Shavur ('The Broken Song') is the title of a cycle for choir that Holliger wrote based on 12 of David Rokeah’s poems. The idea of discourse can be seen in the fact that Holliger set both the Hebrew and the German versions of the text. This principle is also evident in the different ways the choral forces are handled. There are antiphonal or double choir settings, but also responsorial settings for solo and choir. In Utopie Chorklang ['Choral Sound Utopia'] he divided the choir into three groups of twelve voices each. These three groups are 'tuned' in different ways, like registers of an organ. The second group sings its pitches, but the first group sings a third of a tone higher than written and the third group a third of a tone lower.

The Swiss Heinz Holliger will be 80 next year, so this CD is timely. Well known as an oboist of extraordinary virtuosity, he is also an equally distinguished composer. This CD brings together five of his choral works, some of which were recorded live over a decade ago; with a single exception – Psalm for 16 solo voices, a key work – they are all premiere recordings. The SWR Vokalensemble under Marcus Creed are more than equal to the challenge of performing this music, which includes the substantial and extremely difficult 25-minute motet after the poetry of Kurt Marti, Hölle Himmel. A fascinating disc of a too-little heard composer outside continental Europe.