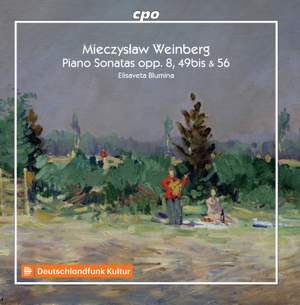 Alongside classical piano repertoire, Echo Klassik prizewinner Elisaveta Blumina has a keen interest in the music of the twentieth and twenty-first centuries. Her internationally acclaimed recordings of the Soviet Jewish composer Mieczyslaw Weinberg, to whose rediscovery she is tirelessly committed, are among the projects documenting this involvement. For cpo she has now recorded three sonatas by Weinberg. The clear proportions and modest length of the Sonatina op. 49 led Weinberg to rework it in 1978 in order to expand its structure, lengthen it into the Sonata op. 49 bis, and to readjust its balance. In this sonata of classical design Weinberg further developed the spectrum of musical expression and increased the technical demands when compared to his Sonata No. 2 and the Sonatina. The Sonata op. 49 numbers among the few productions for the concert hall from this creative phase, which was reserved for intensive occupation with film music – and in particular for animated films.