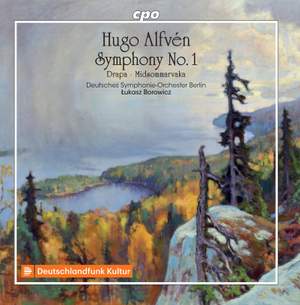 The DSO and Łukasz Borowicz prove how invaluable it is to have this music recorded by a distinguished central European orchestra, more for philosophical reasons than qualitative ones. There is... — Gramophone Magazine, June 2018 More…

Along with Wilhelm Stenhammar and Wilhelm Peterson-Berger, Hugo Alfven surely ranks as one of the leading composers of Swedish late romanticism. In the country of his birth he was noted for his compositions inspired by Swedish folklore - one of which, Midsommarvaka, his most famous work, is heard on Vol. 1 of this new edition of his complete symphonic works. It is both astonishing and impressive that Alfven, who previously had composed nothing more than a few piano pieces, songs, and chamber works, suddenly came forward in 1897 with a full-length symphony of some forty minutes in length. This highly regarded Symphony No. 1 exhibits very finely nuanced tone colours, and with it he immediately became known as a capable and experienced composer. Alfven composed Drapa, a monumental, magnificent, and festive work with the subtitle 'King Oscar II in memoriam', for a gala event at the Royal College of Music and conducted its premiere on 18 October 1908. For this ambitious project CPO have secured the support of the German Symphony Orchestra of Berlin and Lukasz Borowicz – one of Germany's best orchestras and one of today's most promising young conductors.

The DSO and Łukasz Borowicz prove how invaluable it is to have this music recorded by a distinguished central European orchestra, more for philosophical reasons than qualitative ones. There is a patrician quality added to the inbuilt alertness and drive of the symphony’s outer movements in this performance that sets it apart from Neeme Järvi’s finely articulated account with the Royal Stockholm Philharmonic.