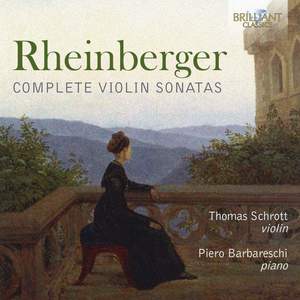 When a composer is as well-known as Joseph Rheinberger (1839-1901), it’s extraordinary to think that there remain first recordings to be made of substantial parts of their catalogue. Yet this album presents the premiere on CD of two highly appealing Romantic violin sonatas which fill out our understanding of Rheinberger’s diverse output and deserve to stand alongside many more frequently played works in the genre.

Even if Rheinberger is chiefly remembered for his organ and choral music, he wrote assiduously for the concert hall and especially chamber venues, in a vein that will remind listeners of Mendelssohn, Franck and especially Brahms. The First Sonata in E flat is distinguished by the idyllic character of its central slow movement, and by the thrilling whirl of its Tarantella finale. It is in the later E minor Sonata that we find the kind of expansive approach to melody and form which was to prove so influential on a generation of composers through Rheinberger’s work as a teacher at the Munich Conservatoire, where his pupils included Engelbert Humperdinck, Ermanno Wolf-Ferrari and Wilhelm Furtwängler.

The album is completed by three song transcriptions, with the song-line given to the violin. These are Vorüber and Ich wandelte unter den Bäumen from Rheinberger’s Op.4 collection, and Im Sturm Op.41. They are played by the violinist Thomas Schrott – Italian born to German-Austrian parents – who is currently a member of the superb Lucerne Festival Strings founded by Rudolf Baumgartner.

Joseph Rheinberger (1839-1901) has gone down in history thanks to his impressive collection of organ music, akin in style and second only to those of Felix Mendelssohn. Composer and organist, Rheinberger was a highly influential musical figure in the second half of the 19th century, as a teacher his pupils included Wolf-Ferrari, Humperdinck and Furtwängler.

Apart from his organ works he wrote noteworthy pieces for orchestra and a fine body of chamber music. This new recording features his two Violin Sonatas, works of considerable substance and impact, in style reminiscent of Mendelsohn, Brahms, Dvorák and Franck, but distinctively speaking its own language in rich harmonies and lush melodies, embedded in challenging instrumental textures.

Excellent performances by Thomas Schrott, a seasoned soloist, chamber music player and concertmaster living in Italy, and pianist Piero Barbareschi, who also wrote the liner notes in the booklet.